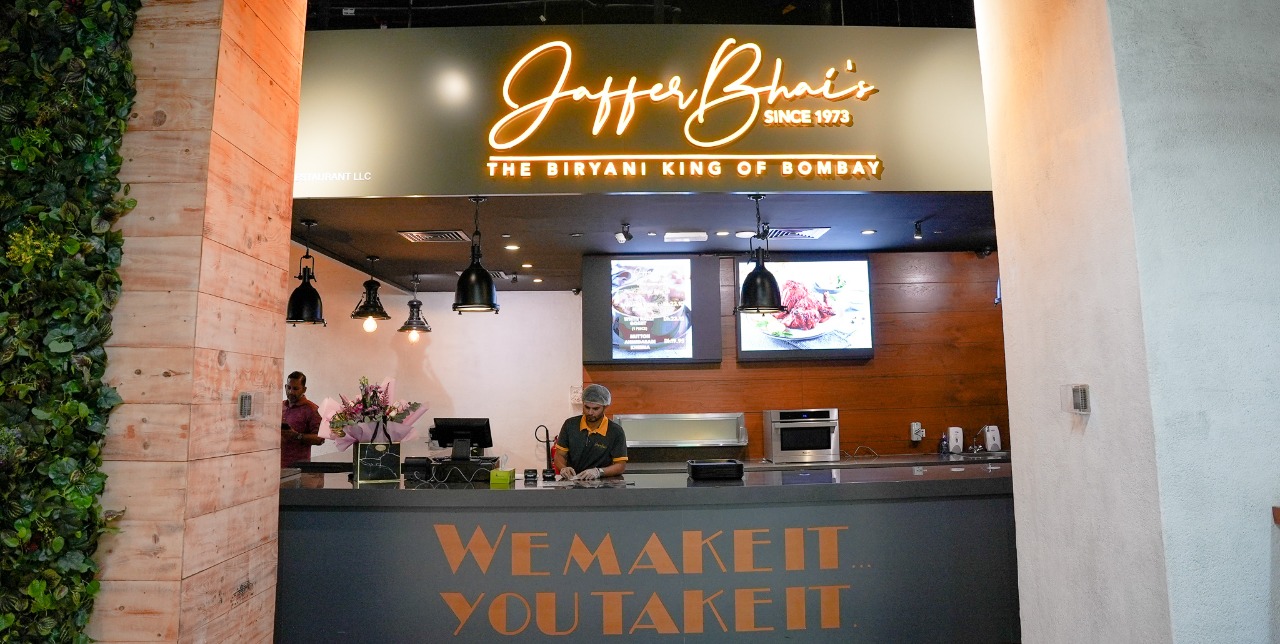 Jaffer Bhai’s, the Biryani King of Bombay, inaugurated their newest outlet in Dubai on Tuesday, November 29, ahead of UAE’s 51st National Day celebrations.

The over-the-counter Quick Service Restaurant (QSR) concept in the South Market food court at the Gate Avenue of Dubai International Financial Centre (DIFC) Is the four-decades-old legacy group’s third establishment in the UAE after their oldest and flagship restaurant in Karama, and a second one in Al Barsha. “This is also by far our most significant step forward considering the concept of the kitchen and the pan-Asian, pan-European/American clientele it will serve, So this is our first truly global restaurant with a very localised outlook making us a glocal outfit,” said Moin Jaffer Mansuri, the second-generation owner of the chain that first began operations in 1973 in Mumbai before coming to the shores of Dubai in UAE in the nineties. “We have consistently been voted one of Dubai’s best restaurants for biryani but there’s more to us than our dum-cooked rice and meat legacy and our specialist team at DIFC outlet can’t wait to showcase it by catering to everyone, including the resident upmarket executive foodies with a more refined palate and everyone else that loves a hearty workday lunch.”

According to Mansuri, Jaffer Bhai’s DIFC will be mostly targeting customers looking to grab a quick bite on the go, in between work and meetings. “And so, the kitchen here will be serving daily specials including biryanis, kebabs and choicest of desserts. But one thing that we are also introducing here is our own version of the world’s best kathi rolls, something we expect our patrons to absolutely fall in love with,” he added. “This is truly a landmark moment for us. It is always a great sign when we can expand and serve new customers in a completely new market.”

Besides the new additions, guests here can expect Jaffer Bhai’s other wildly popular dishes like the 1952 Gosht Biriyani, Murgh-e-Nargis and all of their famous kebabs.

Since the inception of Jaffer Bhai’s Delhi Darbar in Mumbai, India in 1986, it has been the spot synonymous with an unparalleled mouth-watering pot of Indian dum biryani. With a passion in his heart and hands, Moin ‘Jaffer Bhai’ Mansuri, today leads a team of select chefs to serve what has been consistently rated by media, influencers and foodies as one of Dubai’s best biryanis. Jaffer Bhai imbibed the philosophy of pursuing perfection in the biriyani making process from start to the end from his father. He believes in identifying the right ingredients for a quality product and adding a distinct Mughlai flavour from India’s financial capital of Mumbai to create a biryani that has so far wowed more than 50 million customers over five decades of being in business.