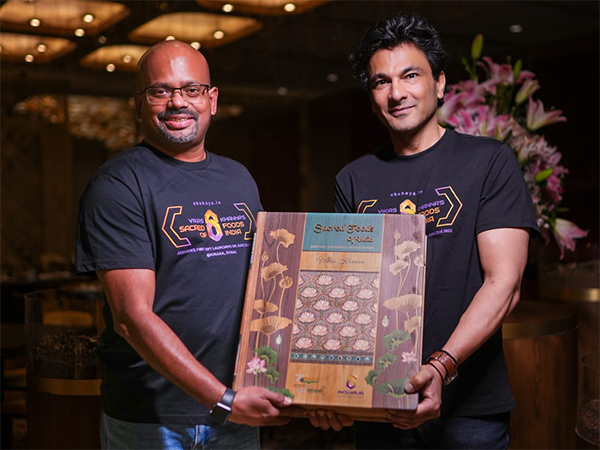 Amid the rising volatility in the crypto market, Akshaya.io, an NFT marketplace launched its ‘phygital’ collection by Masterchef Vikas Khanna based on his book Sacred Tastes of India on Thursday. With this millenia-old recipes of India’s rich culinary heritage are entering the blockchain world today to be secured for generations to come. Michelin-starred chef, restaurateur, filmmaker and writer Vikas Khanna has launched his 38th book and magnum opus, ‘Sacred Foods of India’ as a ‘phygital’ work in Dubai.

The majestic 420-page tome is gilded in gold, adorned with gemstones and Swarovski crystals, with every page printed in natural vegetable dye as a work of art. But it has a secret – a chip embedded that connects you to the non-fungible token (NFT) of the limited-edition luxury asset on the Ethereum blockchain. It is India’s first phygital book, where the physical and NFT versions of the work are linked and only sold together on the world’s first purely ‘phygital’ platform, Akshaya.io. Akshaya.io has created Non-Fungible Tokens (NFTs) of the book which will enable Vikas Khanna’s fans and those interested in rare collectables to own original NFT along with physical book. This purchase will authenticate the originality of this limited- edition work, and ownership of the asset cannotbe duplicated in any form. This is the first-ever collaboration for Chef Vikas Khanna with a Web 3.0 enterprise, and in the times ahead, there is a possibility he can create more augmented reality
(AR) and virtual reality (VR) assets of his works and creations. This magnum opus work is a limited-edition book that brings together recipes for foods served at various holy places across India.