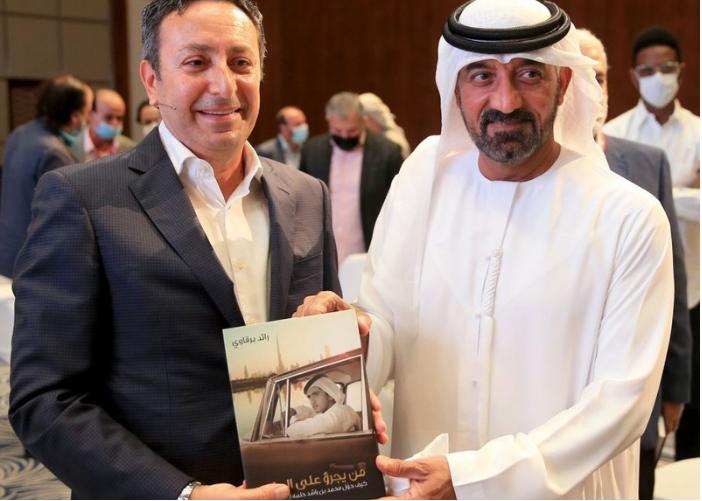 A new book about His Highness Sheikh Mohammed bin Rashid Al Maktoum, Vice-President and Prime Minister of the UAE and Ruler of Dubai, offers insights into how his exceptional mind and unique approach turned his ambitious Dubai dream into reality. The book, ‘Dare to Dream: How Mohammed bin Rashid Made His Dream Come True’, was launched at the Emirates Airline Festival of Literature.

Written by veteran journalist Raed Barqawi, Executive Editor-in-Chief of Al Khaleej newspaper, the book was unveiled in the presence of Sheikh Ahmed bin Saeed Al Maktoum, Chairman and Chief Executive, Emirates Airline and Group. Published by Motivate Media Group, the book highlights how the vision and leadership of Sheikh Mohammed bin Rashid turned Dubai into a success story, a leading global hub for talent, and a place where they can find resources and opportunities to fulfil their dreams.

Barqawi has been a renowned journalist for over three decades and has enjoyed a front-row seat witnessing Sheikh Mohammed’s dream turn into reality. He said: “I have tried to address two key questions in my book: One, just how did Sheikh Mohammed bin Rashid do the impossible and turn Dubai into a unique global role model? And two, how did His Highness manage to empower a culture of dreaming in the Arab world, a world that had stopped dreaming decades ago?

“It is fascinating to be around a personality like His Highness, who has been racing against time to improve the present and future of not just Emiratis but all Arabs. His persistence and ambition pushed me to dig deeper into the history of the UAE over the past 50 years and shed light on how dreams can be achieved in the race to be counted among the top 10 nations in the world. With assertiveness and will, His Highness decided to dream for his country and his people, and today we are reaping the rewards of these dreams.”

Ian Fairservice, Managing Partner and Group Editor-in-Chief of Motivate Media Group, said Raed is one of the most distinguished voices in journalism. The book will be a “fascinating read for anyone who has marvelled at the incredible growth story of the Emirate of Dubai and the UAE”.

In the book, Barqawi dives into the history of the UAE and takes the reader on a journey to the past, to Sheikh Mohammed’s childhood and youth to analyse the factors that helped shape his personality. He then transports the reader to the present to demonstrate the impact of those very factors in Dubai’s success, which have made it the cynosure of the world.

Based on his privileged position as a journalist closely tracking the rise of Dubai, Barqawi also offers his take on the future of the Emirate and its unpredictable and unprecedented pace of growth. “I don’t know when I wake up what this nation would have achieved,” he says.

previous post
Check Out NFTs And Much More At Art Dubai
next post
Emirates’ V-Day offer: Fly with your partner and get 25% off