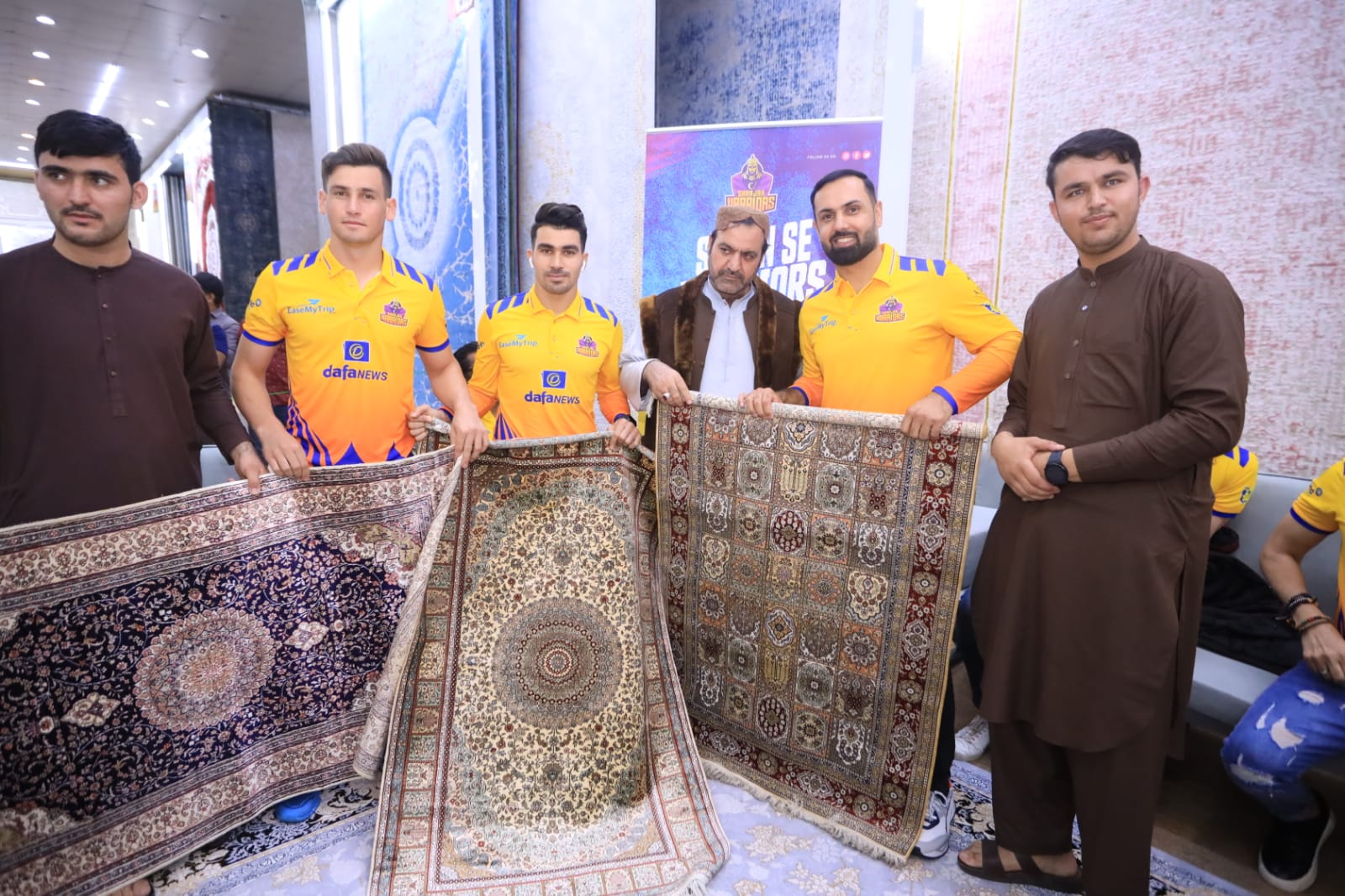 Three Afghan stars of the Sharjah Warriors franchise in the inaugural edition of the International T20 (ILT) League took time off from their title-hunt campaign to mingle with their compatriots on Tuesday evening.  All-rounder Mohammad Nabi Eisakh, the former captain of the national side, hard-hitting opener Rahmanullah Gurbaz and young spin sensation Noor Ahmad Lakanwal besotted a predominantly Afghan community in Sharjah’s neighbouring emirate.

Their pit stop was Al Bustan Trading – the biggest seller of premium Turkish and Iranian carpets in the UAE at Fujairah Friday market – in the scenic northern emirate amid a mellow winter sun and cool breeze, where the players “felt at home-away-from-home among compatriots”.

The Afghan national heroes basked in the company of their country cousins. While the three players mingled with the largely blue class workers, speaking in the Pashto language as much as possible, they also broke into Hindi for the few non-Afghani people as well.

The Afghans, whose population in Fujairah runs into a few thousand, started making this quaint town their biggest base after Bustan Abdul Jalil, who hails from the war-torn nation’s Paktika province set up the eponymous carpet shop in 1996 along with his two brothers.

Bustan’s business flourished under the patronage of His Highness Shaikh Hamad bin Mohammad Al Sharqi. Bustan’s son Fazal Ghulam Habib and his eight cousins are running the business that has seen an uptick since the easing of the Covid-19 pandemic.

Nabi has been staying in Ajman for the past two years. Gurbaz, who, too, divides his time between the UAE and native Afghanistan. The much-travelled Gurbaz was asked his favourite city in the world and he promptly replied it was “Dubai, no doubt.” Both urged their countrymen to “extend whole-hearted support to Sharjah Warriors and turn up at the remaining league matches in full strength”.

The players obliged with rolling the arm over with the bat and ball in the indoor space along with selfies to make the moment more memorable for the audience. The statesman-like Nabi has a nickname “Mr President” given by Kevin Pietersen and which has stuck.

“It is always nice to interact with our fans and we couldn’t be much happier to interact with a few of our own,” a modest Nabi said. “The ILT20 schedule is tight but it is also important to take a step back in training and focus on our strength areas. And no doubt, we cherish our fans who have been passionately following the cricketers.”

Afghanistan have been playing their international fixtures for quite some time now. In November, the Afghanistan Cricket Board signed an agreement with the UAE counterparts to make the country as their home base for the next five years.

“We have some very good players in Sharjah Warriors and the fighting spirit of the Afghans is well-known. Our fans only motivate us to do better,” said Gurbaz.

The motivation goes both ways. “In our hardships of daily lives, I have always missed out on the cricketing craze and I always cherished seeing our team grow. Nabi has led our team for the past decade so wonderfully and it is a once-in-a-lifetime moment for a fan like me,” said the Bustan owner Habib.

Sharjah Warriors is owned by Capri Global, India’s leading non-banking financial services company. Realising that the inaugural season of the ILT20 will need awareness to be initially spread among the working class in the Northern Emirates, tickets for the remaining games of the tournament, which started on January 13 and ends on February 12, are being distributed for free.

The ILT20 emerged as the second-richest cricketing franchise league behind the Indian Premier League (IPL) even before a single ball was bowled.