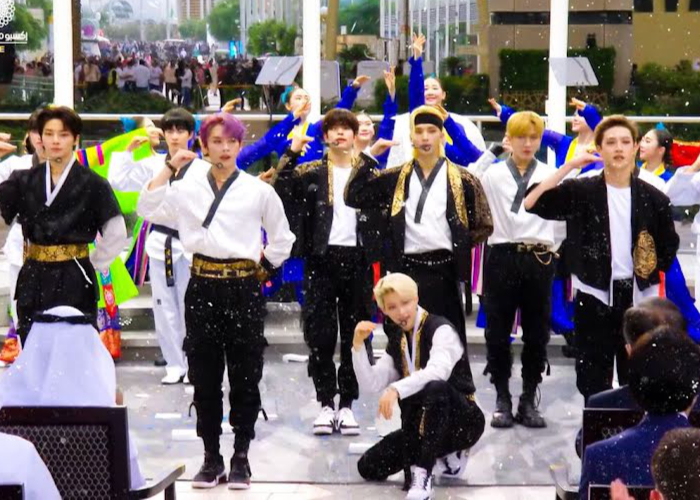 The air was electric, and charged with excitement.
As thousands surged towards the Jubilee stage at Expo, the anticipation built up to see Stray kids take the stage.
Sharanya, a Kpop aficionado, said instead of the rain dampening the mood, the drizzle heightened the vibes at the concert.

The show kicked off with Forestella, a quartet that surprised a bevy of Kpop fans. Instead of the usual hard-hitting tracks expected from a K-Pop group, Forestella set a serene mood with their breathtaking vocals.

Out of nowhere, they gave an epic vocal cover of the haunting main theme of Netflix’s Squid Game.
After Forestella, the energy and enthusiasm were ramped up further with girl group (G)I-dle performing crowd-pleasers like Oh my god and Hwaa.

However, the performance by Golden child (which followed (G)I-dle) was quickly overshadowed by K-pop powerhouse Sunmi.
Regaling the crowd with hits like Tail and Gashina, she showed to the world why she reigns as the queen of K-pop.

Finally, the coup de grace of the concert was here.

A ripple travelled across the crowd as the punchy horns of Stray kids, God’s Menu, rang out.

The eight-member troupe took to the stage donning modern hanboks (traditional Korean attire).
Stray kids made their fandom, the Stays, beam as they delivered energetic performances one after the other.
Beginning with their 2020 magnum opus, God’s Menu, MIROH, and Backdoor quickly followed.

Finally, they ended their performance with their latest title track, Thunderous, a homage to Korean culture.

The Korean cherry on the cake

Finally, the godfather of K-Pop, and our gateway to the genre, PSY made a king-like entry.
The crowd transformed into a giant party, and swayed over his performance of Gangnam Style.

As the night ended and everyone rode the post-concert euphoria, it was clear that K-Pop wave had just taken over.